What to say? Where to start…

I heard years ago the old joke that for some reason still gets vomited out at gatherings and sadly even interviews when someone is asked “Tell me about yourself” without fail someone will always say “I was born at an early age” it always bugged me, but I was a kid so I kept it to myself, yet now I’m at the ripe age of 48… I still think it was a stupid joke.

I was born at an early age, those years were harsh and brutal with waring tribes and famine that ripped our world apart ( I thought at the time) until I grew up and realized my parents protected us from a lot of the harshest of things life threw at us while still smacking us upside the head, it was a given in the “Good ol days”

Yet looking back… they were the good old days, Chernobyl melt down and the threat of nuclear war being a constant thing aside, sure we also got beat and not just by our parents but most of the time we kind of deserved it, at least in my teen years I did.

I’m starting at the beginning because I think as writers we learn many things as our brains develop throughout our early years that most “Non-writers” ignore as they grow up, the people you meet that never think or refer to their childhood… personally I feel it shows in how we develop on a social aspect but that’s a whole different blog post.

I try to look back and use moments, conversations and experiences to inject into my writing from when I was a kid. There are times I think those moments are the most pure and raw memories of human interactions… we were innocent, thirsting for knowledge and understanding… hell even acknowledgement from our higher ups.

Sadly “Seen and not heard” was also the staple back in those days, so we ventured off into the streets and woods that surrounded our small universe to find our understandings of this world until the street lights were ready to come on.

That in itself was probably one of the influencers to my loving being out in the woods, sitting on a hot summers day in the shade of a huge tree as a small creek bubbled its way further down and out of sight, the crisp coolness was a stark contrast to the punishing summer sun as cicadas noisily beat their mantra above our heads.

To me it was a perfect memory.

For me those memories back in the early 1980’s as the teenage years granted you that little bit more of the rope of freedom opened up a whole new world, we started to experience new emotions and moments in time that began the true development of our adult selves, we could choose the woods or the mall? it was thrilling.

My first experience of disassociated death was Elvis Presley. I vaguely remember hearing about his death on the news but my parents were not fans of his music so it was never played in our home, but I still remember playing my board game and seeing it on the news.

A kid I kind of hung around with at that time, whose name only ever comes to me at night always around sunset had a mother who was obsessed with Elvis and I remember her crying the year he died and every other year on the day of his death, their home was covered in velvet Elvis pictures one even had a clock in it… it was weird hence the “kind of hung out with”

It bugs me today that I can never remember his name as his mother would stand on their porch that was at the end of our street and scream his name every damn night as the sun was setting until he finally came home… that’s why I only ever remember it at early evening, yet sadly by the morning it is gone again.

I am going on about my early years only because this web site and my dreams… passions, and desires for a Burrito (Burro) all stem from those years.

Growing up we didn’t get a lot of presents throughout the year but somehow our parents were able to get crazy at Christmas, and one year I got the Lone Ranger set with the town! it was bloody amazing, but the one action piece I fell in love with was the Donkey from the Prospector set.

They called it action but the only moving parts were his ears that moved back and forth and his tail that spun around, still I loved it, and until moving to America and leaving my things in storage I still had that Donkey from the set.

It was one of those many memories that fueled my fire to one day live on a farm surrounded by nature and just write.

I remember the day my hopes were dashed by my dad. Who for no fault of his own other than trying to ensure I didn’t go off the tracks and end up in jail asked me what I wanted to do once I left school.

I told him I wanted to become a writer. Well he dashed those dreams and told me to get a real job and earn a proper pay check.

I was just lucky enough to finally meet the woman of my dreams after tooo many failed attempts of love to reawaken those long ago desires and realize that thing I was searching for was not held within the confines of the city or suburbia that for whatever reason so many crave and thirst for like zombies searching for brains.

She fell onto my life trail quite by accident and now here we are… but i digress.

Throughout my years of growing up I experienced so many things, more than kids today… and that’s not because I’m getting old and I’m hating on the young (They are assholes though) we were out in the world running from adults that were cursing our existence because we broke a window or pissed off their dog, jumped their fence to make a short cut or just got mouthy because we all knew they didn’t know our parents. We experienced it all on every level day by day.

I think the one thing that sets writers apart from the non writers is that we remember our childhood… not in every case sure, but for the most part, at least the ones I’ve spoken with we remember every aspect of it, moments, emotions, actions and overheard conversation that the adults had sober and drunk, the whole shebang.

We remember everything…. not always exactly as it happened mind you, but still… we remember enough to keep those memories going, and if we are fortunate to get them into a story that becomes popular? well then our childhood and the people associated with those times will last as long as that book will right along with the people that read them.

That to me? is beyond awesome, because some people in this world leave it far too damn soon so that makes the end result even more better.

And it spurs me on even more to get to where we have to be, we both have a dream and it is so similar that it must become our shared reality. 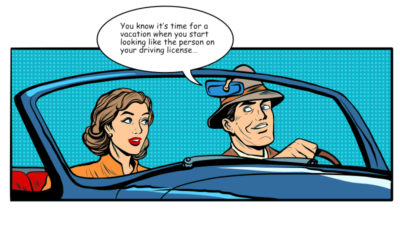 What Could Go Wrong? A new Hyundai Venue. A cargo top. A dash cam. A drop off in Texas. 12 Days and 6,000 miles from Oregon to Tennessee and back? Three years ago my son and his fiance' moved to Tennessee for reasons that will be in a different post. It's not that...